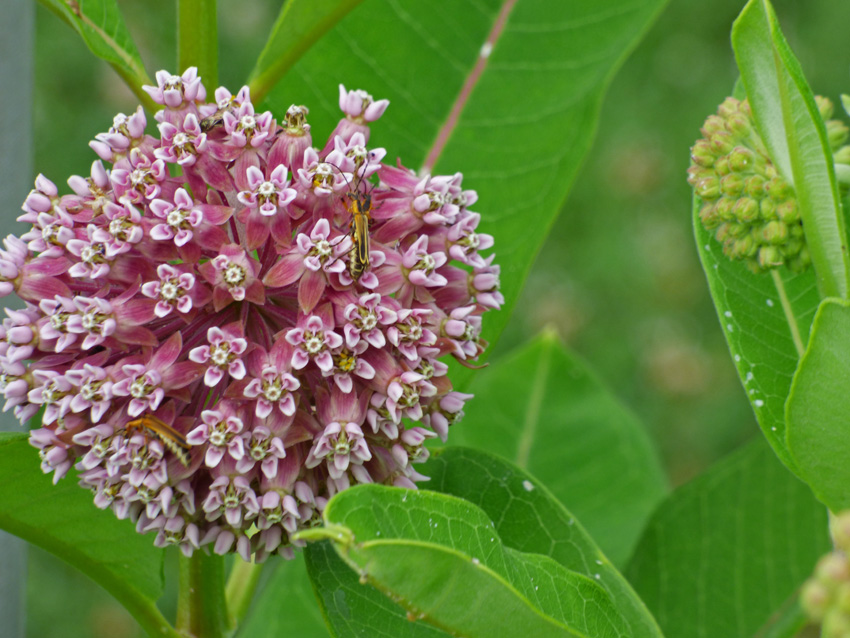 Yes, we normally think of milkweed a summer blooming wildflower, but the seeds are beginning to fly from their pods, so I couldn’t resist a post on them in October. Common Milkweed is an important plant because so many species of insects depend on it. Monarch Butterflies, Milkweed Bugs, and Milkweed Leaf Beetles only eat milkweed, and could not survive without it. Many other species of insects use milkweed as their primary food source, or as a major food source. Common Milkweed grows up to six feet tall. It has large, broad leaves, usually four to ten inches long, sometimes with red veins. This plant is found in fields, gardens, and along roads. Common Milkweed flowers are pinkish-purple clusters or balls which often droop. 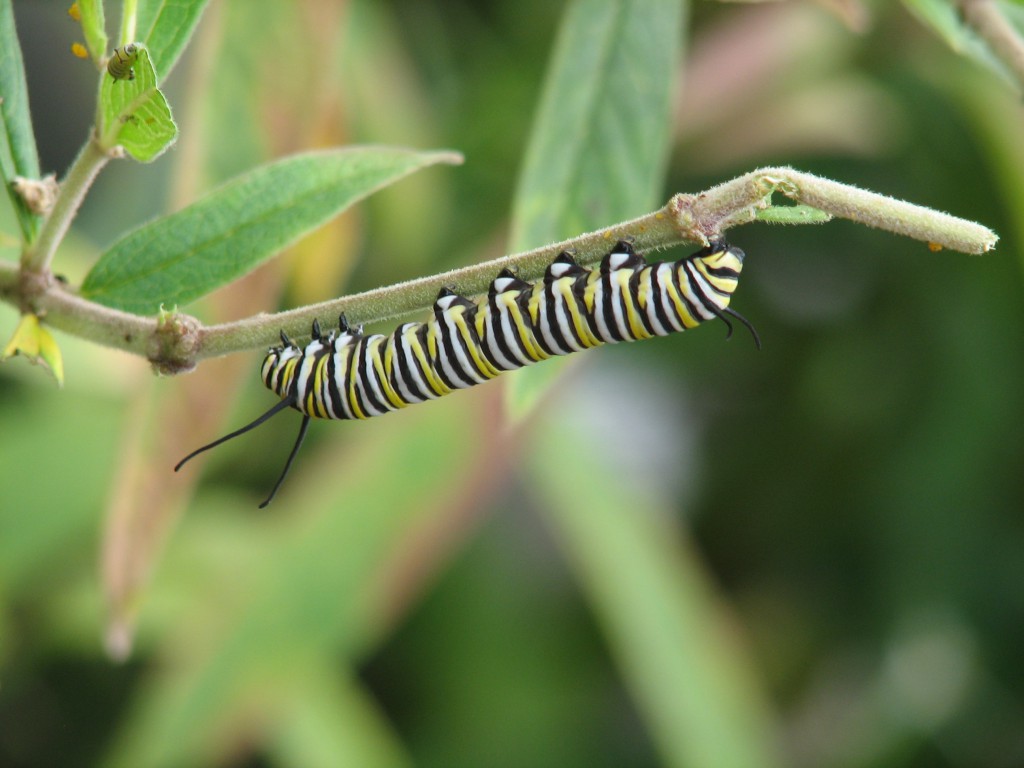 The leaves of Asclepias species,  are the only food source for monarch butterfly larvae and other milkweed butterflies. These plants are therefore often used in butterfly gardening. Shortage of this plant is one of the reasons we have fewer monarch butterflies in the last few years. Common Milkweed, when broken, lets out a milky sap. This sap has poisons in it, called Cardiac Glycosides. Some animals can eat the glycosides and not be harmed. When the Monarch butterfly’s caterpillar munches the leaves of milkweed, the glycosides go into its body, making the caterpillar poisonous to predators. Even after the caterpillar has changed into an adult butterfly, it keeps the glycosides in its body. 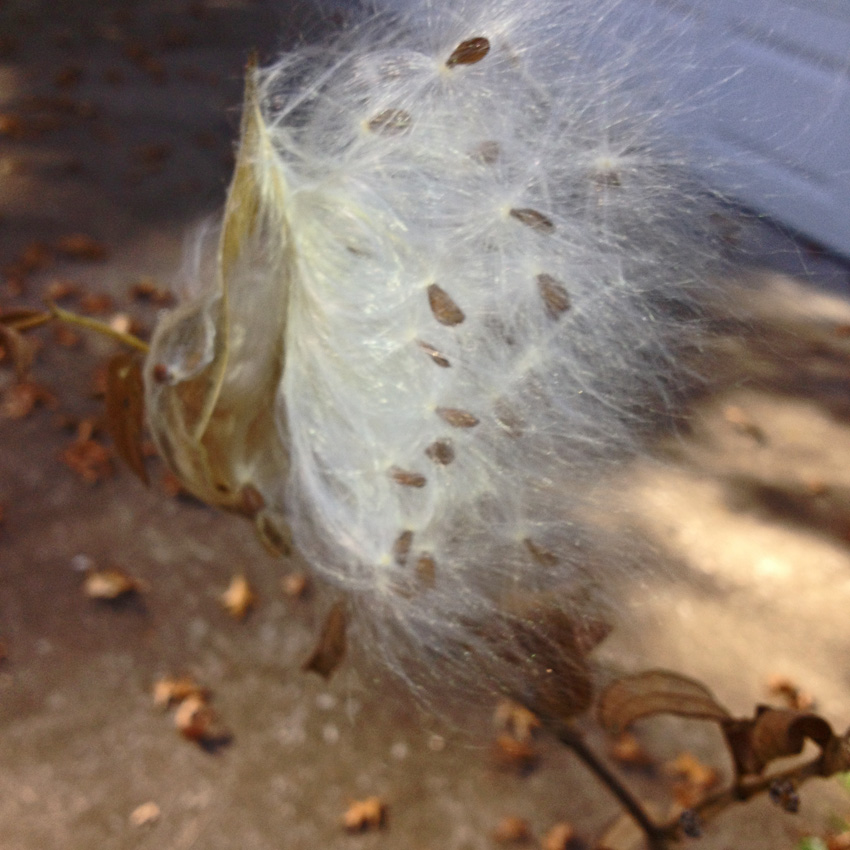 Fruits are green pods which turn brown before bursting open to let out fluffy seeds. Milkweed seeds are spread by the wind, which catches the fluffy part and carries the seed for long distances. Milkweed can spread quickly underground as well, by rhizomes. Rhizomes are roots that produce new roots, then these new roots sprout new plants. Through rhizome spreading, Common Milkweed forms a colony that quickly crowds out other plants. The milkweed filaments from the follicles are hollow and coated with wax, and have good insulation qualities. During World War II, over 5,000 tons of milkweed floss were collected in the United States as a substitute for kapok, used to fill life jackets. As of 2007, milkweed is grown commercially as a hypoallergenic filling for pillows. A study of the insulative properties of various materials found that milkweed was outperformed by other materials in insulation, loft, and lumpiness, but scored well on various metrics when mixed with down feathers. 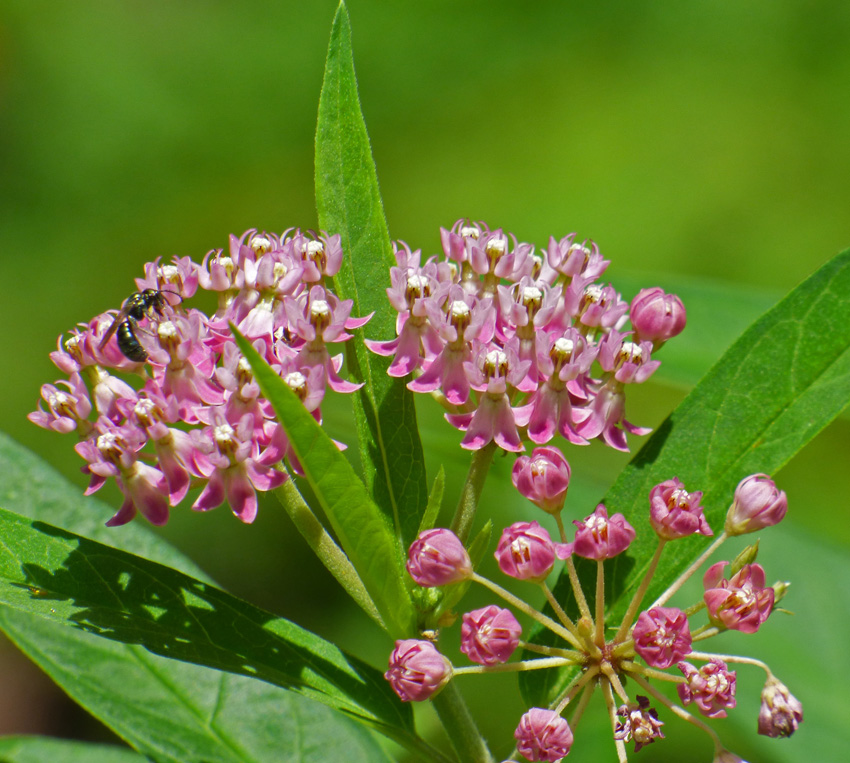 Milkweed is a shelter and hiding place for other species as well. (This Swamp Milkweed has a smaller cluster of flowers, and thinner leaves.) Yellow Jackets eat bees and flies which get trapped in the flowers, and crab spiders ambush visiting insects. Milkweeds are an important nectar source for bees and other nectar-seeking insects, and a larval food source for monarch butterflies and their relatives, as well as a variety of other herbivorous insects (including numerous beetles, moths, and true bugs) specialized to feed on the plants despite their chemical defenses. In the past, the high dextrose content of the nectar led to milkweed’s use as a source of sweetener for Native Americans and voyageurs. The bast fibers of some species can be used for cordage. Milkweed latex contains about 1 to 2% latex, and was attempted as a source of natural rubber by both Germany and the United States during World War II. No record has been found of large-scale success. 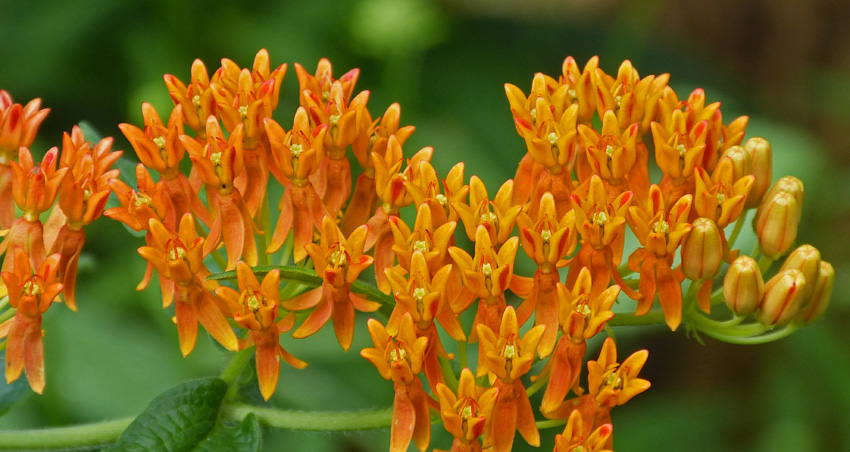 What’s Blooming in the Woodland Garden

Birds in the Grasslands