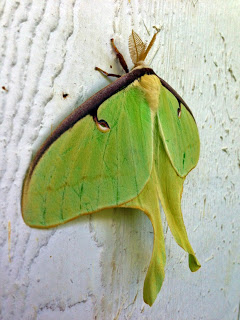 Last Saturday was Pet and Butterfly Day at Creasey Mahan. There haven’t been as many butterflies recently as a few years ago, but 2 days before the event we found this gorgeous luna moth perched on the wall outside the maintenance building. Moths, of course, are nocturnal, so it’s surprising to find one in plain sight during the day. We captured him for everyone to see, then released him at the end of the afternoon. 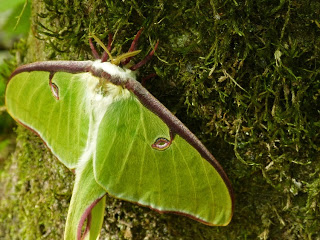 Luna moths can be found in deciduous hardwood forests, where a variety of trees including white birch, persimmon, sweet gum, hickories, walnuts, and sumacs serve as host plants for the young caterpillars.  The adults are very strong fliers and are attracted to lights. Adult Luna Moths don’t eat; in fact, they don’t even have a mouth. They only live for about a week, and their only purpose is to mate.

Female Luna Moths release a chemical at night which attracts males. Notice that the antennae of the male are large and feathery, all the better to detect and locate the female by her pheromones. Adults die shortly after mating or laying eggs. Usually, two generations are born each year (that means that moths that spent the winter in a cocoon will hatch, mate, and lay eggs; then their children will hatch, mate, and lay eggs which will hatch and make cocoons for the Winter). Luna Moths were once very common, but are now considered an endangered species in some areas. 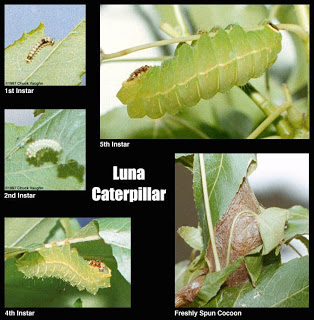 The eggs hatch in about one week and the caterpillars are sedentary and solitary feeders. They click their mandibles when threatened and can vomit fluids to deter predators. Leaves and silk are used to spin papery brown cocoons in litter under the host plant. Adults will have one brood from May-July in the north, two to three broods from March-September in the south. The caterpillars have 5 “instars”, in which they shed their skin to allow growth into a bigger size. 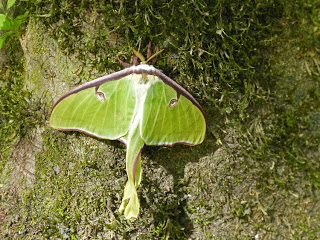 Predators of Luna moths include bats, owls and some hornets. Do you think the large “eyes” on their wings would discourage a predator?  For a terrific video showing an adult emerging from the cocoon, go to http://youtu.be/atOSro3_W7c.