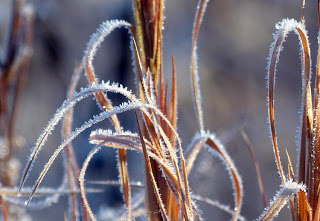 Traditionally, Jack Frost is the personification of frost and cold weather, a variant of Old Man Winter held responsible for frosty weather, for nipping the nose and toes, coloring the foliage in autumn, and leaving fernlike patterns on cold windows in winter. He is traditionally thought to leave the frosty, fernlike patterns on windows on cold winter mornings (window frost or fern frost), and nipping the extremities in cold weather (frost bite). We are used to seeing thick frost on the windows of our car when it sits outside over a clear winter night. Then we have to scrape it all off before we can see to drive to work or school in the morning. If you are running late, you may back out whether you can see clearly or not! 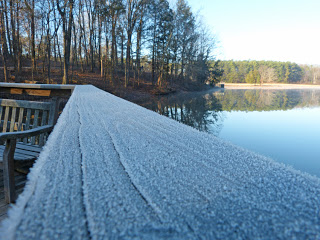 Have you ever wondered what causes frost? Frost forms in much the same way as dew forms. Frost usually forms when a surface cools through loss of infrared radiation to a temperature which is colder than the dewpoint of the air next to the surface, AND the temperature of that surface is below freezing (32 deg F, or 0 deg. C). The source of this moisture is water vapor contained in the air.
The heaviest coatings of frost usually do not occur at the coldest temperatures because very cold air can not hold very much water vapor. Instead, thick deposits of frost usually occur when the air temperature is close to 32 deg. F. 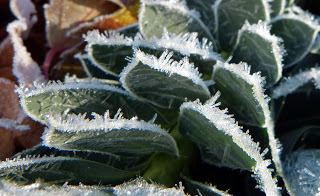 Water molecules in the air are constantly bouncing off of surrounding surfaces. If a surface is cold enough, the molecules will stick to the surface rather than bouncing off. Once a layer of frozen molecules form, new molecules will tend to align themselves with those already there, forming regular crystals. If you get down close to the frost, you can see these delicate crystals rising up into the air. Don’t breathe on them or they may melt! 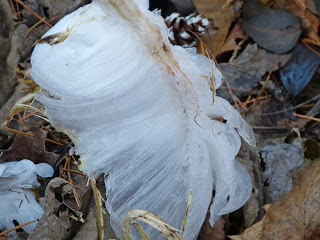 Have you ever seen a frost flower? Looking like spun glass or cotton candy, these fragile creations, which are really not flowers at all, last only until the warm rays of the morning sun melt them away. Since their formation and disappearance cover such a short period of time, few people have seen them or even know of their existence. 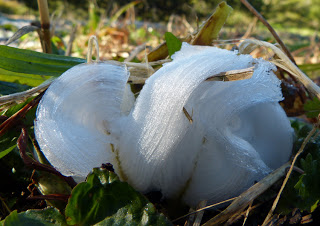 Frost flowers develop when air temperatures are freezing but the ground still is warm enough for the plant’s root system to be active. Plant juices flow from these roots up into the stem, where the cold air freezes them. As the moisture in the plant freezes, the ice crystals push out through the stem. They may emerge from a small slit to form thin ribbonlike strands or they may split open a whole section of the stem and push out in a thin, curling sheet. Sometimes several ribbons of ice push out to create a flowerlike petal effect. As long as the juices flow, air temperatures remain low, and the plant is shaded from the sun, these ice crystals continue to form. But the petals of frost flowers are very delicate and will break when touched. They usually melt or sublimate when exposed to sunlight and are usually visible in the early morning or in shaded areas.

So the next time you see a white coating of frost in your yard in the morning, so outside with a magnifying glass and see all the wonderful structures built by old Jack Frost!